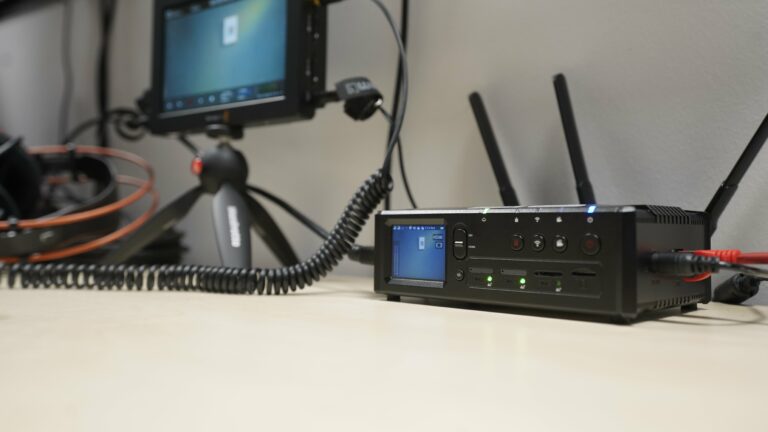 Teradek is known for its livestream, video transmission and video production products. The product VidiU Go is aimed at everyone who wants to live stream professionally without having studied for it. Just like the Mine Media Q8. We compare both products, which are relatively similar, and weigh up whether the Mine Media Q8 is a Teradek VidiU Go alternative.

1080p60: Both do that. So more than sufficient for the typical streams. If you stream with 25 frames at 1080p, you will be served extensively by both Mine Media and Teradek.

SDI and HDMI. Also applies to both. Because both can process both SDI and HDMI signals. The Mine Media Q8 has a small advantage here: A switch on the device allows you to easily switch between SDI and HDMI input. Practically, for example, used as an “emergency switch” if the main control room fails.

There are differences here: While the Q8 trumps with 3 built-in LTE modems, WiFi and Lan connectivity and as an ace still has a USB port for connecting an extra modem, the VidiU Go only has 2x USB ports for modems and Lan and Wifi available.

However, the VidiU Go SDI + HDMI Deluxe Kit comes with a case and two node modems that fit perfectly on the housing and thus complement the device with two professional livestream modems. The price of the deluxe version is around 2,500 euros net.

Teradek knows that the encoder is one of the critical components of the livestream equipment, which is why they have built a remote management platform “Core”, which also enables the management of the VidiU Go.

It’s similar with Mine Media. The Q8 can be configured locally or remotely via the mobile phone app “M Live” as well as via a web platform.

We know the situation: Sometimes the stream has to go live within seconds. With the Teradek, the process of starting up and configuring has therefore been greatly simplified so that it can start in a few minutes.

Simultaneous stream across all connected networks

VidiU Go was also developed for difficult production environments. That is why he has incorporated connection technologies such as high-end broadcast systems. The Q8 also relies on tried and tested technology for live transmission from the manufacturer with a long video tradition. Both devices ensure that a live stream never fails again, because with the VidiU Go and also with the Mine Media Q8 you can stream over the combined bandwidth of Ethernet, WiFi, and the 3G / 4G / LTE modems. The Mine Media Q8 even has 3 built-in and an additional LTE modem as a stick.

Conclusion : Mine Media Q8 is a Teradek VidiU Go alternative in the deluxe version.

What should also be emphasized: Anyone who attaches particular importance to data protection will be surprised at Mine Media: The German partner www.livestream-server.de hosts the bonding for the devices at the German data center Hetzner. Thus, the data flow for the bonding of the video stream remains completely in Germany, with German providers.

The Munich Security Conference is an institution for global foreign, security and defense policy. Whether US Vice President Kamala Harris,