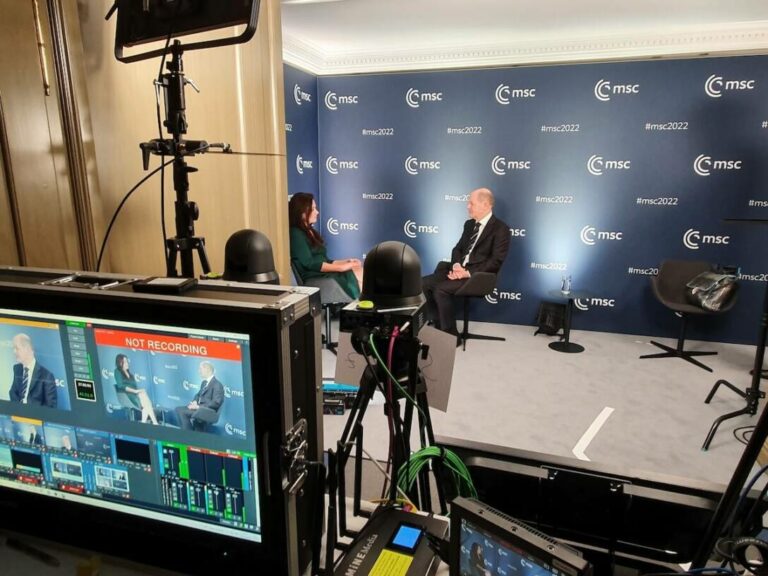 The Munich Security Conference is an institution for global foreign, security and defense policy. Whether US Vice President Kamala Harris, UN Secretary General António Guterres or Chancellor Olaf Scholz, the MSC guest list reads like a who’s who of world politics. And right in the middle with a mobile TV and live streaming studio: the Munich live stream agency Stream1 , which relies on the mobile bonding router M4 Mini from Livestream Shop.

When Chancellor Olaf Scholz is interviewed live by US presenter Hadley Gambel, the streaming connection has to work and under no circumstances should it fail. That’s why our partner Stream1 relied on the M4 Mini, the Internet Bonding Router from Mine Media.

No time for trial runs – the technology has to function smoothly

During our three-day mission at the Munich Security Conference, the politicians sometimes literally gave each other a hand. While an interview was being recorded, the next high-ranking guest was already waiting in front of the door. Not for the faint of heart or unstable live stream hardware. Because the politicians’ schedule at the conference is tight, there was hardly any time for trial runs. As soon as the guest takes a seat in our studio, it is usually “camera is rolling!”.

The mobile live stream studio at the Munich Security Conference

What did the streaming setting look like during the conference in the Bayerischer Hof? Stream1 set up the studio together with Lobeco in a salon directly above the lobby. There was space for four guests and another spot for a direct 1-to-1 switch. The Stream1 team positioned numerous cameras, both PTZ and Sony FS-7, at several points. The director always had different camera perspectives to choose from. As mentioned above, Stream1 relied on the M4 Mini to connect to the internet. Several powerful LED spotlights provided TV quality. Powerful Sennheiser headsets and Thomann speakers guarantee ideal sound quality.

The who’s who of world politics

Peplink alternative for livestream use